Graphic Scores are a wonderfully useful and creative tool for use in composing activities with youngsters. 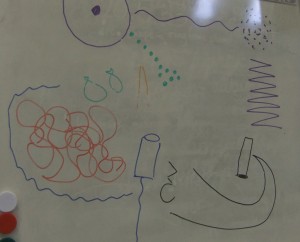 Many of the examples here are from a recent series of workshops Cheryl led at the Grassington Festival in June 2013. 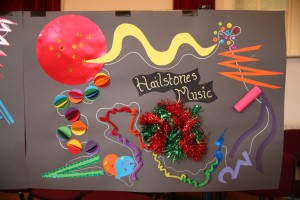 with story ideas for a weather myth in a sort of creative relay, children at six primary schools in the Yorkshire Dales composed music and song to illustrate their two finished stories “Kilnsey Crag and the Planet Rainrocks” and “The Treasure At The Start of the Rainbow”. Two of the schools composed new lyrics to a rainbow song, and four composed incidental music, with their initial ideas being recorded graphically and rather scruffily by Cheryl at the point of composition. These scribblings were then turned into neater, more colourful scores to practise from, and then larger, textured scores were created for the final performance. Different c 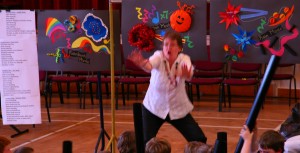 olours are used to represent different musical sounds. Some actual music notation symbols were introduced to the students and they revelled in their use! After the workshop, the graphic scores were displayed like art works in the Grassington Town Hall for the remainder of the festival and the recordings of the two performances were played out on a loop!