Off I’ve popped every Tuesday for the last 18 months from my riverside, countryside, fireside haven of a house in Northumberland into the urban heart of Yorkshire to spin my yarns of musical exploration with the youngsters of Lupset. Sometimes there’s been flooding on the line, or excessive snow, or a trip to New Zealand to prevent me going there, but otherwise off I have indeed popped. Sometimes I’ve driven with my jingly-jangly musical paraphernalia in the back, but mostly I’ve travelled on the trains. I love the trains. Let me tell you about my Tuesday trains. 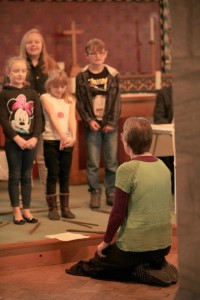 The first, from Alnmouth (highlight: nearby beloved viaduct striding out towards the sea) or Morpeth (highlight: Victorian letter box waiting expectantly for over 100 years) is usually small and barely warrants the effort of getting out work to think about. Once Newcastle is attained thought can begin in earnest. Trains are so glorious for nourishing that creativity zone in your head. Is it the rattling, or the movement, or the complete freedom from paying attention to anything else? I don’t know, but it is on these trains to Wakefield Westgate that I’ve composed some of the more emotional songs for our “Something Special” musical.

Never forgetting to gaze out at the glory that is Durham Cathedral nor take special note of any steam rains lurking magically outside the National Railway Museum at York (today, thrillingly, it was “Bittern” and “Sir Nigel Gresley” gathering for the 75th anniversary celebrations of “Mallard” ’s record-breaking run to Edinburgh), my focus has generally been on new music, new musical activities, and new music-based historical episodes to explore. We’ve set ourselves some challenges during the process, exploring the music of several countries as well as unfamiliar times from our own, and I too have been challenged, for example by Tyler to spend an entire day listening to Lady Gaga’s hits in order to write our signature song, and by Draiden to allow him to run a session based on a clutch of current hits!

Once the train pulls into Leeds all creative thought is abandoned as without fail a large crowd of loud, brash and jostling travellers embarks, and generally makes the final 15 minutes impenetrable to inventiveness. Being thrust out into the fresh air and relative solitude of Wakefield rekindles the pizzazz again. Usually arriving early into Wakefield I have used my time to explore this city. Always an eager enthusiast for viaducts and industrial prospects, Wakefield neither disappoints nor surprises, but old little bits of the city here and there intrigue, and have sent me a-scurrying to the old library for a spot or two of research. I discovered 19th century maps with two collieries on the site of the current Lupset Estate, Whinney Moor and Snapethorpe. I read a bri 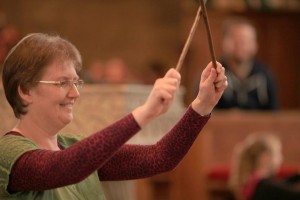 ef history of Lupset Hall. I read about the slums of the city centre which were cleared and the residents re-housed in the new estates of Flanshaw and Lupset. I found, indeed, a multitude of positive and affirmative historical things about the area all inspiring shreds of melody, rhythm or lyric which eventually found their way into our performance.

I usually then walk up to Lupset, via the aisles of Sainsbury’s for my return journey snacks, and Thornes Park to inspect the encroaching seasons. From the outset I have been fascinated by the intricately curvaceous street plan of the Lupset Estate as seen on maps, and have on several occasions ventured deep into the labyrinth, to explore or to take pictures of street name plates, naturally enough. I think I became the most astray in my quest for Neville Road, one hot day in April when I was without map, and my memorised version of it let me down badly. I found myself looking at the sun for direction as I meandered my way through all the crescents and curlicues. I espied Snapethorpe Primary School through the trees and rooflines, and thus was saved, but I did not find Neville Road that day.

And so to St. George’s Community Centre where our creative endeavours commence with news both good and bad, both conventional and slightly bizarre, always fascinating, then on to composing, singing, acting, instruments, discussion, games, dance, then home. Berni and her team at the Community Centre are remarkable people, providing all manner of support, activities and advice for the local residents. I was very proud to be a part of it during the gestation of “Something Special”. Indeed, all the residents of Lupset that I have encountered during this project have been nothing but extremely friendly and welcoming. Our team of Youth Music participants have inspired me from the outset. Some have dipped in and out. Some have stayed from the start. The widening of their musical experiences and keenness from constricted to eclectic, through a pattern of cajoling and affable negotiation has been a delight to behold. T 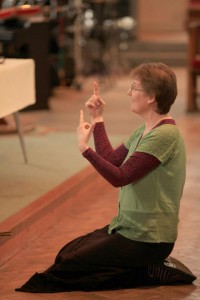 heir increase in confidence and empathy from rolled-up, spiky hedgehogs to high-flying, outwardly shining dream-makers of the highest order has been a very stirring experience. Come to think of it, these youngsters from Lupset have reached into my mind and woven a spell of enthusiasm and anticipation. They’ve sparked a veritable cloudburst of composing creativity from me.

So then, after a lift to the station and happy chatting with Eddie, Chris or Sarah, I embark on my trainly way home, usually standing until Leeds where the mass exodus clears many out, leaving seats a-plenty to relax with my previously mentioned snacks, next week’s Radio Times and my reflections on the day’s creativity. You catch me today on the last of these journeys. I have just left the last ever session of Yew Tree Youth Music and therefore there is plenty upon which to reflect. Our performances last week were fraught with dangers – the songs I have composed for these youngsters did not hold any compromises, rhythmically, tunefully, stylistically; the script Sarah wrote for them had challenged their memories and their self-confidence; the presence in the audience of so many relatives and friends alarmed some…and yet…..they pulled it off with aplomb. They looked and sounded happy, they sang with assurance, they delivered their lines with character and sympathy, they brought tears of both pleasure and emotion to the eyes of the onlookers, they were so very, very successful. So thanks and well done to performers Courtney, Tyler, Emily, Draiden, Lucy, Eve, Lily, Harrison, Olivia, Ben, Callum, Ellen, Libby, Michael, Sam, Tom, and every other lovely person who came to one or more of our sessions to help put “Something Special” together.

Although it is the performances that certainly radiate the brightest glows for many of the participants and certainly the audience, for me it is the processes we have gone through to get to that stage which glow brightest, and warmest for me. To evolve from the “Why do we have to listen to this stuff?”, “I’ve got nothing to say!”, “This place is dead meat!” first session in January last year to the “My favourite song is [mellow, poignant, gentle, folksy] Pigeon Hands!”, “The best thing was it gave me confidence to sing on my own!”, “This place is dead sweet!” sessions of this last week, is beyond all hopefulness we may have had. I do hope I meet some of these youngsters, and am lucky enough to work with them again.

This journey home also gives me time to reflect on the friends I have made too – occasional visitors and enchanting colleagues Gemma, Danny, Paul, Nigel, Andy, and also the “regulars”. As by far the oldest participant in this project, I have watched with grandma-ish fascination as Eddie and Chris have thrived in this sometimes tricky environment. It has been an utter (and very cheery) treat and honour to work with and chat with these two brilliant young music graduates, who have inspir 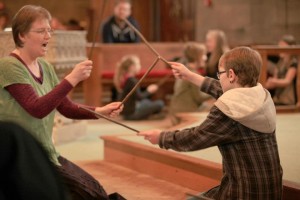 ed me to consider my own musical practice with fresh eyes and ideas. The creative and dynamic spark behind the entire project has been Sarah, of course, whose energy and vision has led us all down this remarkable path. The Yew Tree Youth theatre world that she has created is a wondrous thing, and it has been a real privilege to be included in the Yew Tree family for the last couple of years. Her empathy and care for these young people, not to mention of course her writing and staging skills have made her an estimable colleague and friend during this project. I feel sure that we will indeed work together again, and I look forward with great eagerness to that.

Regrets? Only the one. That Yew Tree Youth Music Keyboard and I have failed to become great friends. We have snarled at each other in every session and in every rehearsal, but like the pros we are, we did come together slickly and without gripe in both performances when all buttons were pressed correctly by me, and YTYM Keyboard responded with the nervously anticipated style, tempo and voice.