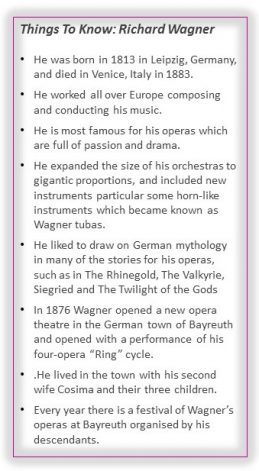 Composing and listening activities for youngsters inspired by Wagner’s “Ride of The Valkyries”, and the German mythological stories that influenced him.

A warrior called Sigmund is running away from an army. He finds a cottage in a forest and asks the people who live there, Hunding and his wife Sieglinda if he can stay there for the night. Sigmund doesn’t realise that Hunding is a member of the army that’s after him. Hunding agrees to let him stay the night, but tells Sieglinda that in the morning he will kill Sigmund and be the hero of his army. Sieglinda is upset about this because she likes Sigmund and doesn’t want him to be killed. So she puts a sleeping potion in Hunding’s cocoa that night, so that Sigmund will have time to escape. She also hopes that Sigmund will take her with him because Hunding is not a very nice husband and he forced her to marry him in the first place.

So Sigmund and Sieglinda run off in the night and escape. When Hunding wakes up in the morning and realises what has happened, he is very angry, and sets off to kill Sigmund.

Meanwhile Wotan, the leader of the Gods has decided to save Sigmund, and tells his daughter Brünnhilda to ride out on her winged horse and protect him and Sieglinda in their journey. The trouble is that Wotan and his wife, Fricka have an argument about this. Fricka thinks that Sigmund should be allowed to die because he helped Sieglinda escape from her husband. Wotan decides to have a peaceful day, so he changes his mind and asks Brünnhilda to bring back Sigmund’s body to his kingdom of Valhalla and be part of his army who will fight for him at the end of the world, a time called Ragnarok.

Brünnhilda sets off with the other Valkyries to find Sigmund, Sieglinda, and Hunding. When the Valkyries spot them Hunding is catching up fast and will soon be close enough to attack. When Brünnhilda tells Sigmund that he is about to die and he must come with her to Valhalla, Sigmund refuses unless she takes Sieglinde too. The other Valkyries are not happy about this because it is not allowed for living people to be taken to Valhalla. They don’t want to get into trouble with Wotan and Fricka. While they’re having their argument, Hunding catches up with Sigmund and kills him with his sword. He’s about to grab Sieglinda when Brünnhilda, quick as a flash, gathers up Sigmund’s body and Sieglinda and flies off into the storm. The other Valkyries follow. (This is when our music is played in the opera).

Once they back to Wotan’s home in Valhalla he is not happy that she has brought back a living woman as well as the body of Sigmund. He sentences her to sleep for many years on a mountain surrounded by fire so that no-one can save her and she can’t escape. 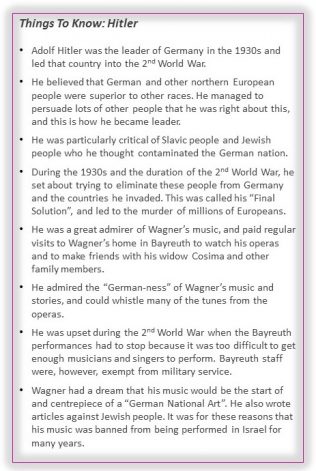 5. The Ride Of The Valkyries