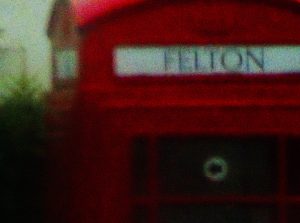 Upon hearing that The Bridge Singers’ recital in May 2016 was to be all about our local villages of Felton and West Thirston in Northumberland, Alison (one of the founders of the choir and a member of the 2nd Alto section) requested that that there should be a song about the telephone box which sits on “our” bridge joining the two villages over the River Coquet.

The tenors and basses of the choir were already learning a song for them alone – one of the 19th century Coquet Fishing Songs – The Fisher’s Invitation, so it seemed perfectly fair and appropriate that this new song about the telephone box should be for the sopranos and altos only. We have, during our first few months of existence enjoyed singing a few songs in an early 20th century/barbershop style, and so the musical ideas for this song started to flow. 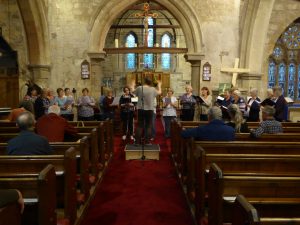 The lyrics make reference to the afore-mentioned fishing song (a gad is a fishing rod, and a creel is the basket into which you might place your catch), to the decline in the number of these iconic and picturesque landmarks (I hadn’t realised quite how rare our saved one is until I went a telephone box hunt in early 2016), and to the other uses to which the boxes themselves have been put, when an actual telephone has been deemed unnecessary (The Felton Info Box houses leaflets about local events and attractions). 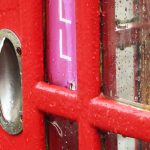 I think I can confidently say that this song was one of the most popular ones amongst the audience in the concert…and also amongst the choir members themselves!