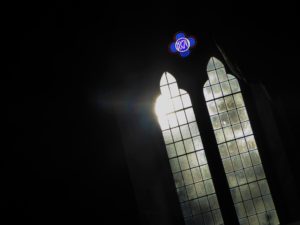 The Brief:
Compose a song for The Bridge Singers to be performed at their “Magical Glass” concert in June 2017. The topic of the song to relate to a window in St. Michael’s Church, Felton (the venue for the concert) which is in need of repair.

The Window:
It’s at the back of the church and is made of uncoloured frosted glass, with the date “1870” in a small quatrefoil of decorated stained glass. It has a partner window with the initials “TI” which refer to Thomas Ilderton, who was vicar of Felton from 1850 to 1872.

The context:
The first half of the recital was to contain music inspired by some of the windows in the church (St. Michael, St. Gabriel, War Memorial, Moses, Crucifixion, The Lamb Of God) and the second half would be more secular referring to other windows and indeed other glass (drinking glasses, mirrors, glass art). This new piece would be the first in the concert, and refreshments at the end provided by the church would be sold for the benefit of the window restoration fund. 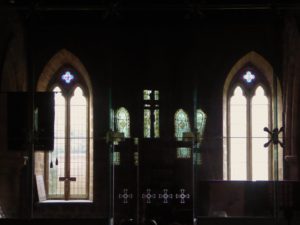 Communing with the window:
I went down to the church many times during the composing of this piece and noticed these things:
• The window is understated compared to the other more colourful and decorative windows in the church. It is for this reason that I dubbed it “Quiet Window”.
• Both windows are high; higher indeed than most windows in the church.
• It is adorned with spiders’ webs and other insect tracks.
• It usually has an assortment of stuff in front of it (noticeboards, a folded-up table tennis table) and also on its wide sill.
• The sandstone surrounding it is crumbling away (you notice this particularly on the outside), and from the inside there is one point where you can see daylight twixt glass and stone.
• There is a glass dividing screen half way along the nave of this church, and if you stand in certain places about the church you can see up to five reflections of the 1870 window and these reflections place it beside other windows which are not actually near it at all.

All of these observations made their way into the text of the song: 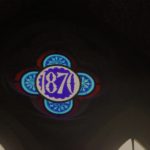 Quiet window
Keeps its counsel
While long-dead are reburied, 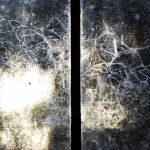 While trysts are kept,
While whimpering heads are bathed,
While clamorous kindred catch our ears
With their rainbow stories. 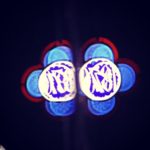 Emerging beside archangels, lambs, pyramids,
And Thomas himself,
Who placed it there with mannered simplicity.

Quiet window
Of cracks, of light splinters, of crumbling sand
Time to shout your thoughts 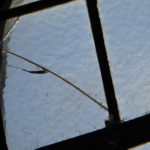 From your lofty prospect,
Shattering your patient silence.

Musical ideas to explore:
• Oscillating A minor/B major chords
• Pedal notes and chords
• Monophonic (out of synch.) textures
• Solo soprano with choir sopranos to the fore.
• The sounds of a glass orchestra (the choir had experimented with these during their Singing Sunday in Ingram. Listen here!)
• “Opening out” textures (chords from unison melodic patterns)
• Soaring, ethereal, reflective moods
• Antiphonal textures
• Whispering timbres

Learning it quickly:
We had a month to learn this piece. The sopranos played a blinder with extra rehearsals. The antiphonal bottles were a problem with regard to breath control, so we ended up with just tenors and basses playing them. I developed a system of conducting which meant that the bottle players did not need to follow the music, but watch me instead. Jamie and I made a learning video to help everyone get the feel of the piece. 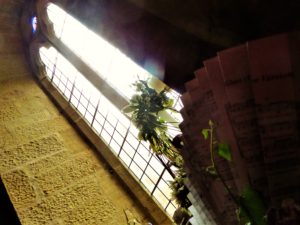 A week before the performance:
St. Michael’s Church hosted a flower festival and the “Quiet Window” was given the most exquisite makeover by Ann Lings with arrangements inspired by our theme of “Magical Glass”. The arrangement was still there for our concert and also all the detritus was removed from in front of it!

The world premiere performance:
June 17th 2017 at St. Michael’s Church, Felton, Northumberland. The concert opened with this piece. Sue Chapman read out the poem, and we segued straight into Gabriel Fram Heven King with droning while choir members made their way back to their regular choir positions. 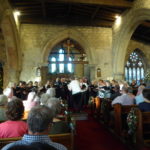 The second performance:
A month later we were a guest choir at Brinkburn Priory with a 45 minute slot. The piece was in the middle of our set. We dispensed with the bottles, due entirely to the length of time it takes to tune them, and that music was given over to the glasses. 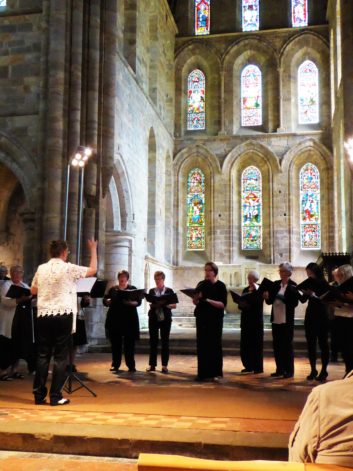 We did not read the poem beforehand as it was not there for the audience to look at. We also did not segue straight into another piece, but stopped and took some applause before continuing.

Feedback:
It was mixed, as you might expect with a “modern” piece, but the vast majority was positive, with particular praise being showered quite deservedly upon the brilliant soprano soloist, Rebekah Hoskins, who has the most clear and expressive voice. The collection for the window restoration raised over £500. 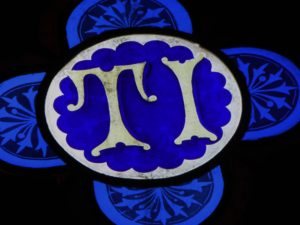 The future:
The window will be restored at some point and that at least will provide an excellent opportunity to sing this song again. I would also like us to sing the song in St. Michael’s Church in Ilderton, which is where Thomas Ilderton is buried, and also in Ingram, where he was Canon up until his death in 1895. In the meantime, I have become obsessed with Thomas Ilderton, and am spending a goodly amount of time reading his private papers and those of the Ilderton estate in the Northumberland Archives at Woodhorn Museum. I like that I can run my fingers over his signatures. This research may lead to further music, you never know.