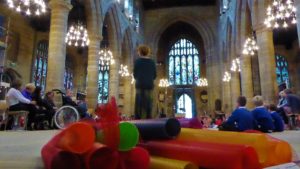 In June 2017, I was hired to deliver musical workshops on the theme of maintaining friendships, with around 200 Year 3 students. These were part of the three Community Cohesion days at Wakefield Cathedral, in which students from several Church of England Primary Schools around the city come to the cathedral with their teachers and teaching assistants for a day of arts-inspired workshops, making new friends at the same time.

This year the teachers had requested of the Community Learning Manager, Tracey Yates, that we focus on long-term friendships and maintaining them, and they also pointed out that the 2017 cohort was “boy-heavy” and this had caused some issues with falling out and bad feelings.

I decided this year, to compose more of a chant than a song – three different chants, in fact, to go with three stories about two friends who happened to be boys. We sang, and chanted, and played boomwhackers with syncopation, in irregular time signatures, with gusto and quite a bit of accuracy.

Each story centred around some sort of fissure in the boys’ friendship, but they always worked out a way to sort out their problem and move on.

in the first story, Sand Wind Rock, Sammy is insensitive to Manu being less physically fit than him, and Manu reacts with ill temper and insults. Both are hurt, but the hurt is forgotten the next day when they share an inspiring experience.

In the second story, Most Valuable Player, Sammy crossly refuses to accept Manu’s help with a problem because he thinks Manu doesn’t really understand. Manu is patient and persistent in his desire to help his friend. In the end, Manu’s help is accepted and Sammy triumphantly solves his problem. He is grateful to Manu for persevering.

In the third story, Beach Blog, the boys miss each other over the summer holiday. Manu is having a bad time and Sammy helps him through from afar. They do happily spend the end of their holidays together.

Each of the stories was accompanied by a chant relating to the temporary irritation in their friendship and the permanent fixing of it. All the chants and boomwhacking patterns are illustrated in this video compilation of the three days. If you’d like a copy of the sheet music for this chant and round, click here.