This unit of work for primary school classes explores the respiration system through scientific investigation and musical activities.

Focus: Science – Breathing
Curriculum Links: Science – ask questions and decide how they might find answers to them; use first-hand experience and simple information sources to answer questions; explore, using the senses of sight, hearing, smell, touch and taste, and make and record observations; to recognise…the main external parts of the bodies of humans…
Achievement objectives: Students will observe and record what happens when humans breathe.
Resources: pens/pencils/crayons, paper.
Safeguarding note: You won’t be able to do this activity if your school has a no-touching policy, and even if this does not apply to should ascertain whether the members of the class are happy to participate.

2.The Parts Of Us That Breathe

Focus: Science – Breathing Apparatus
Achievement objectives: Students will research information on the breathing apparatus of humans.
Resources: Follow on from 1. Thinking About Breathing. Research materials about the human body 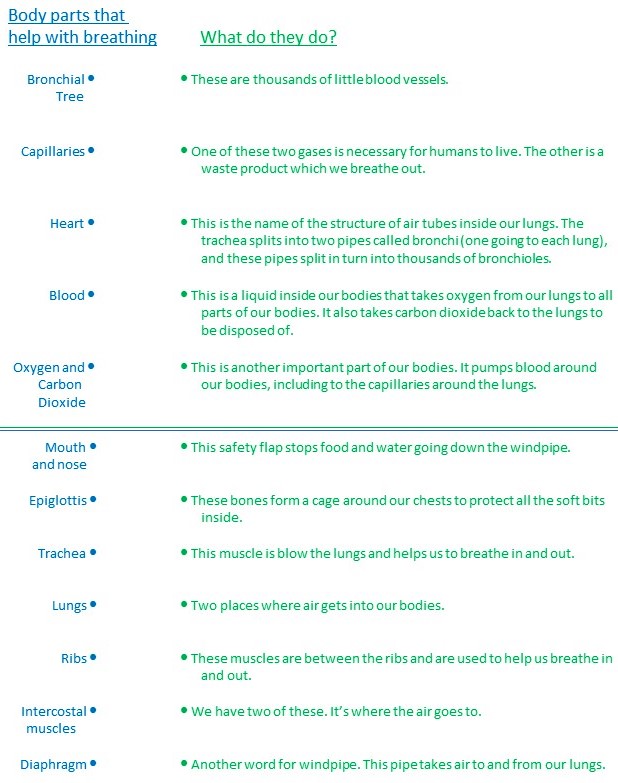 Focus: Science – Investigating skills, Planning, Obtaining, Presenting, Evaluating Evidence
Achievement objectives: Students will collect data about breathing, present it in tables and/or line graphs, and evaluate their results.
Resources: method of measuring people; balloons (if the balloons are thick and difficult to blow up, you might need to blow them up with a pump first to loosen them), chart to record data; tape measure to measure balloons.

6. Transfer your results into a line graph like this: 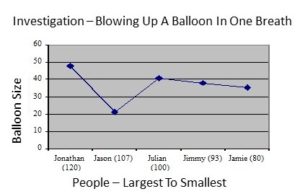 7. What does this graph tell you about the original question?

8. Why do you think Jason’s result is so low in these results? Give suggestions.

Focus: Science – Good Health.
Achievement objectives: Students will learn about the effects on the human body of some diseases and drugs, and about the importance of exercise for good health.

What is a yawn? A yawn is a way of getting rid of lots of extra carbon dioxide in the lungs.

What is respiration? Respiration is when cells in the body use oxygen and sugars from the food we eat to produce energy.

What is the larynx? Your larynx is your voice box.

How does the larynx work? Air from your lungs passes over your vocal chords and makes them vibrate, producing a sound.

How much of the air around us is oxygen? One fifth.

Focus: Music – Timbre and Composing. Curriculum Links: explore, choose, combine and organise sounds and musical ideas, within musical structures; How sounds/music can be made in different ways and described using given and invented signs and symbols; Achievement objectives: Students will explore timbres, and compose music. Resources: Instruments, means of notating music

Case Study – Vision Of The Future

I used this music to create a musical dance/drama with a class of year 1 students which was presented to the school in book week. The school’s teacher/librarian had chosen the themes for each class – ours was “A Vision Of The Future”. Below are the processes we went through, plus the final script. 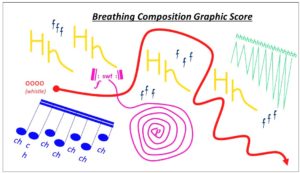 Here is a copy of our composition. The students already knew about semiquavers being fast and short notes so they chose that way of writing the ch sound. They also understood about loud and quiet and the musical symbols for them, so they suggested we use p and f for the swf sound. They thought I should write swf lots of time to show that it repeated until the end of the spiral, but I explained that there was a short cut and taught them the repeat sign.

We performed the composition to ourselves several times in a few different ways:

The class was divided into groups – one for each sound. I drew a metre rule from left to right across the blackboard. As the right hand side of the ruler touched their sound they made the sound;

Still divided into groups, the class followed the directions of a conductor who pointed at different sounds with rulers – one in each hand so that two sounds could be played at once;

We wrote numbers on the sounds, then played the sounds in this order – everyone performing each sound;

Pieces of iron – too heavy for year 1s;

Pieces of cardboard, spray painted with silver – yes, worked quite well, but not as visually exciting as our winning suggestion;

A large piece of silvery material under which children thrust their arms in and out – this was good for getting the throbbing going, but didn’t look much like a lung with pointy little finger shapes. Also silvery material is quite expensive – we tried it out with an ordinary sheet. 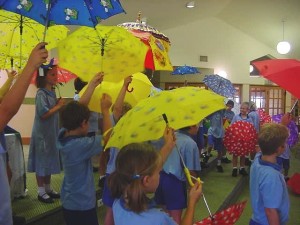 Umbrellas throbbing in and out – this was the one! We ended up with a lung made of seven umbrellas – four sitting, three standing behind, throbbing in and out, and opening and closing, and twirling, each covered with aluminium foil – it was spectacular!

All of the above served the dual purposes of introducing the students to the various elements of the story and the movements involved, as well as auditioning the children without their knowledge for their part in the performance. The class teacher and I did an open audition for the job of reader.

Here is our final script:

Vision Of The Future using the music Ironlung by David Downes

The iron lung is in the middle of performance area.

Children are asleep around the iron lung.

Flower children are dotted around the perimeter of the performance area.

Musicians are at one side with a microphone.

Reader: This iron lung stands for all the technology we rely upon more and more in our lives

Lung throbs with umbrellas in and out etc.

Reader: In the future, will children rely completely on technology for everything they do?

Children wake up and plug themselves into the lung and rush about doing everyday things in a rushed and mechanical way.

When music gets to the “broken” part, the lung breaks into parts and each umbrella-wielding child spirals away to land on the ground beside one of the flower children.

Children are unplugged and return to sleep. (breathing heavily?)

Reader: Or will we turn right away from technology and live with nature as our breath of life?

Breathing music is performed into microphone/speakers.

Flower children breathe in and out with the music and eventually “grow” into greenery.

Children admire the greenery, pretending to smell and caress etc.

Reader: Or maybe we will be clever enough to live with nature and technology in harmony together.

Children take up book and read.